A city of great diversity, Istanbul is a combination of tree-lined boulevards, cafés and cosmopolitan restaurants set against a backdrop where little has changed for centuries. High-class jewellery and fashion shops jostle with hawkers selling freshly prepared food, shoe-shine boys and the largest covered bazaar in the world. During its 3,000 years of turbulent history, it has been home to the Greeks, Romans, Crusaders, Ottomans and, finally, the Turks themselves – all leaving their mark. We are taught the Roman Empire fell in 410AD when Attila the Hun sacked Rome, but rarely told is that the eastern and wealthier half lasted another thousand years. This lead to some amazingly preserved monuments, with perhaps the greatest legacy being the 6th-century Hagia Sophia, the largest ever church and for over a thousand years, the largest covered space on earth. During the Middle Ages, the Ottoman Empire built another range of monuments to match, including the amazing Topkapi Palace, which was the seat of government of arguably the greatest empire of the medieval age.

We also visit three of the most famous ancient sites in the country: Troy, Pergamon and Ephesus. Each is very different, with Troy being the oldest, dating from 3000 BC, and during more than a century of excavations, nine separate cities have been unearthed, all built over each other. Once a Greek colony built high on a huge rock, Pergamon is an impregnable defensive site with amazing views in all directions, and flourished as one of the ancient world’s greatest centres of learning and healing. During Roman times, the greatest city in the eastern Mediterranean was Ephesus, which boasts an extraordinary number of superbly preserved monuments, including the stunning two-storey Library of Celsus. For many, this is the Pompeii of the East.

We cross from Asia back to Europe on a scenic ferry journey across the Dardanelles Straight – you’ll be surprised by how close Europe is to the Asian shore and it’s not hard to imagine the great armies of Xerxes and Alexander the Great crossing here at their narrowest point.

Turkish cuisine is an interesting blend of Mediterranean specialities: fresh grilled lamb, fish, shellfish with aubergines, peppers and various fragrant olive oils combine to create tasty, healthy menus, all washed down with the excellent and very reasonably priced local red wine.Turkey is the perfect place if you are looking for something a little different and it will not disappoint. It possesses a genuinely unique blend of diverse cultures, centuries of history and an atmosphere that links the mysterious east with the familiar west.

Arrive at the airport to take your flight to Istanbul. On arrival, you transfer by coach to the four-star KoruMar Hotel in the nearby resort of Kusadasi, for two nights half board. The hotel is fully air-conditioned with two restaurants, a large open-air swimming pool and sun terraces overlooking the Mediterranean. 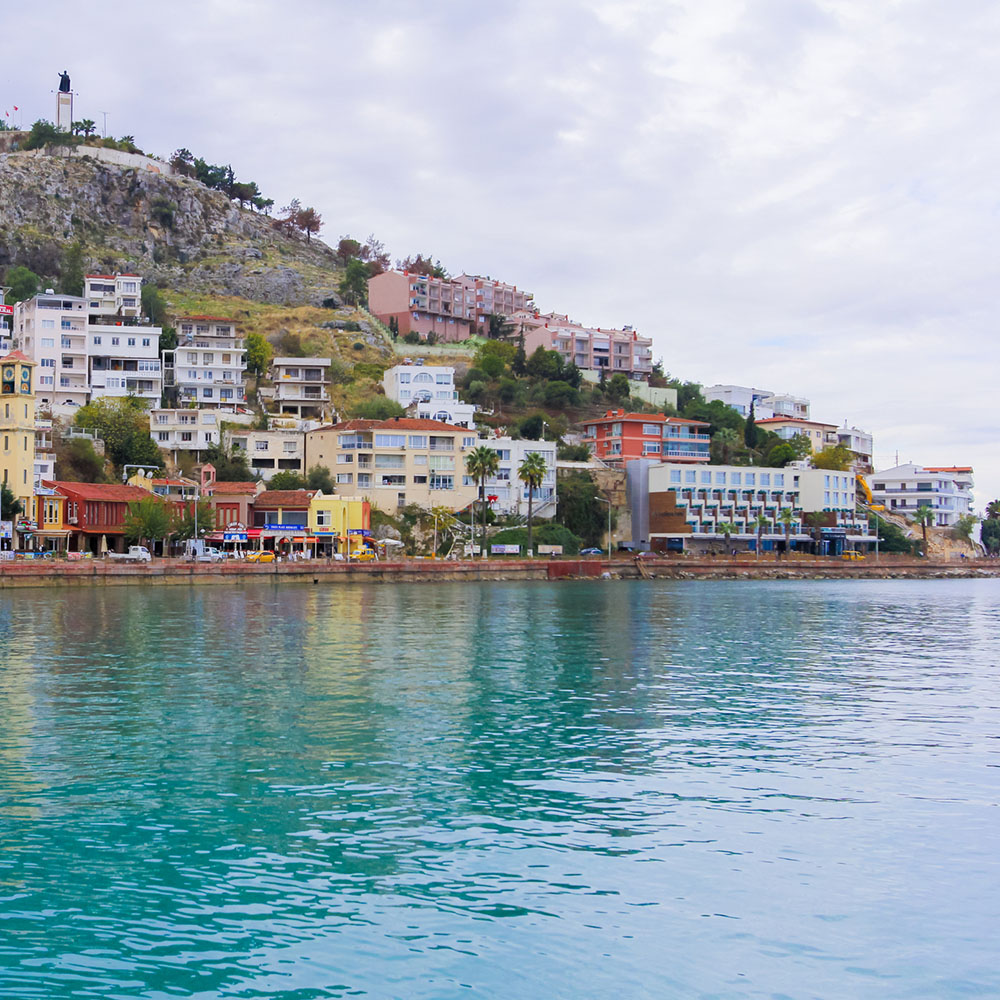 Today we have a guided tour of the nearby ancient city of Ephesus and its breathtaking range of buildings. So great was Ephesus, with its amazing two-storey Library of Celsus and the enormous amphitheatre, that the Romans made it their capital of Asia. We’ll see the Temple of Artemis, which was in its day, greater than the Parthenon in Athens and a pilgrimage destination for a thousand years. Intriguingly, only a fraction of the city has been excavated to date, but the discoveries indicate a highly sophisticated society living in luxurious houses with marble-lined halls, mosaics and beautiful frescoes. As you stroll along the remarkably preserved marble road through the centre of Ephesus, you are walking the same streets as St Paul and St John, who both lived here for several years. We also visit the remains of St John’s Basilica, built by the Emperor Justinian over St John’s tomb. In complete contrast, we next visit the small hillside site of the House of the Virgin Mary. St John was entrusted to care for her and it’s believed she travelled with him to Ephesus. We return to our hotel in Kusadasi with the rest of the day free to enjoy at leisure. 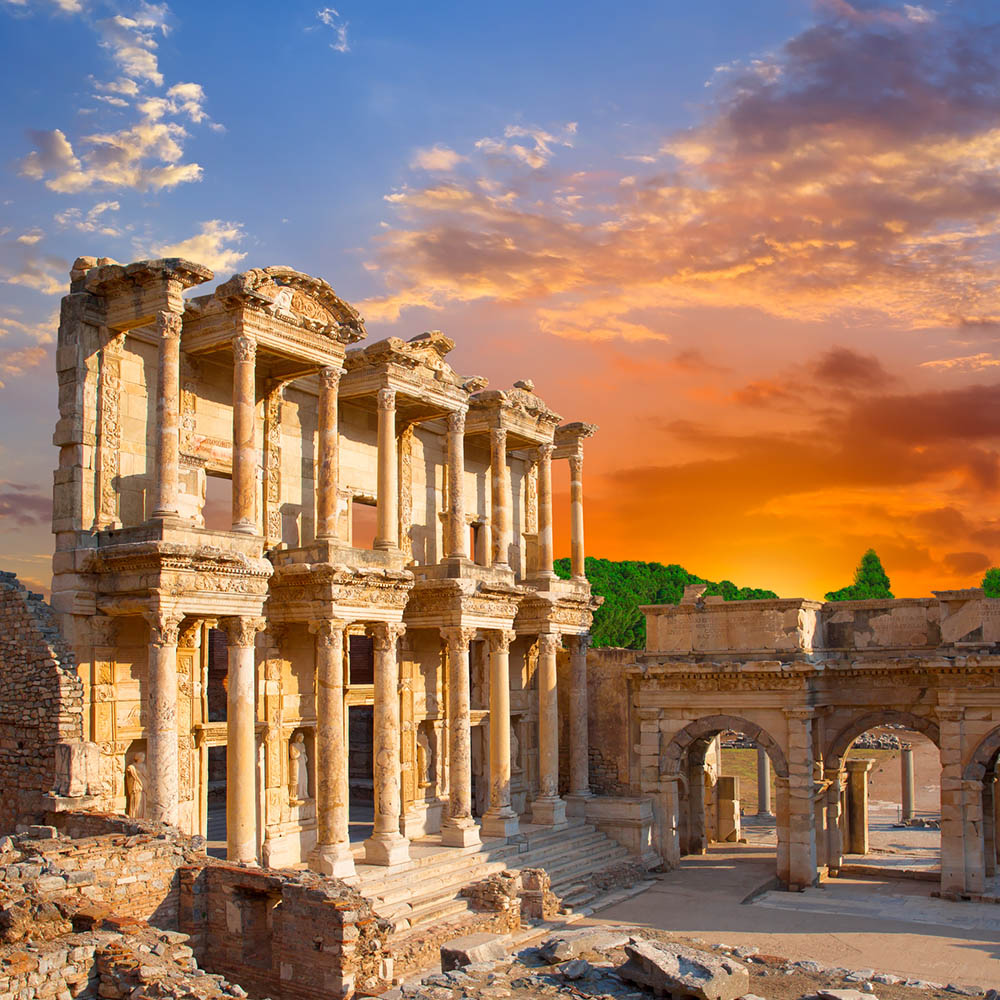 Departing Kusadasi, we follow the coast towards the ancient Hellenistic city of Pergamon. Perched on a high rocky outcrop, with stunning views for miles around, the city was famed for its library, which rivalled Alexandria’s. Knowledge then, as now, is power and so concerned were the Egyptians about this competition that they cut off supplies of papyrus to Pergamon, thus prompting the invention of parchment. We’ll see the remains of the Temple of Trajan, the altar of Zeus and the world’s steepest ancient amphitheatre.

We continue our journey along the scenic coastline to Canakkale and the four-star Kolin Hotel overlooking the Dardanelles. This evening’s dinner is included at your hotel. 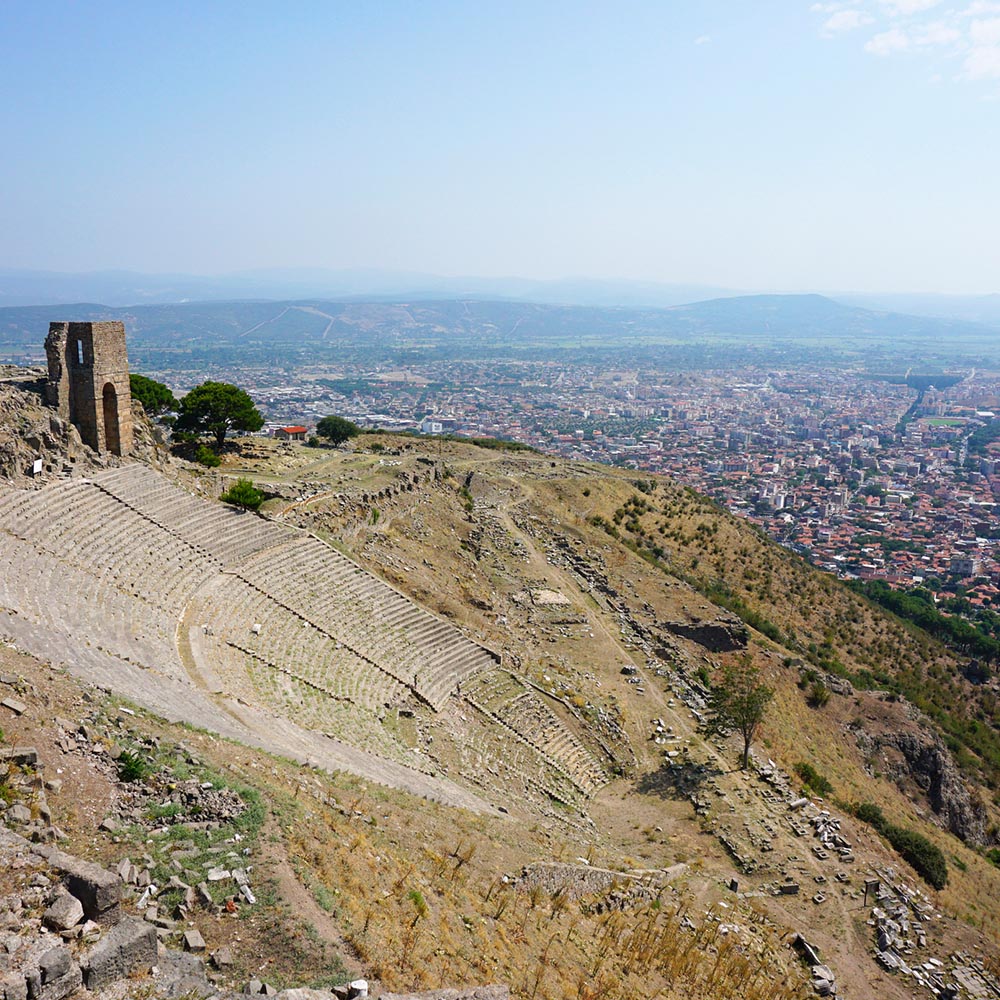 A fascinating day of contrasts awaits today. Firstly, there’s Troy and the famous ‘wooden horse’ story, when Queen Helen of Sparta eloped with Prince Paris to Troy and her enraged husband followed seeking her return. Today, Troy is a complex archaeological site that spans nine separate cities. It nevertheless remains a romantic and alluring place to anyone who has read about the heroic struggles recounted in Homer’s ‘Iliad’.

We then take the short cruise from Asia to Europe over the extremely scenic, steep-sided Dardanelles, one of the world’s busiest shipping lanes. We are now on the Gallipoli peninsula, made famous during the First World War as the scene of one of the greatest and most tragic campaigns of the conflict. More than 35,000 Australian, British and New Zealanders perished during the nine months it lasted, their deaths commemorated in the many cemeteries dotted along this now peaceful peninsula. We visit the Lone Pine memorial and Anzac Cove, where the Australians mistakenly landed and were forced to scale steep cliffs and ravines under constant bombardment.

We continue our journey through this refreshingly picturesque landscape and arrive in Istanbul, where we stay at the superbly located four-star Armada Old City Hotel for three nights with breakfast. The hotel offers views across the Bosphorus and the Blue Mosque. 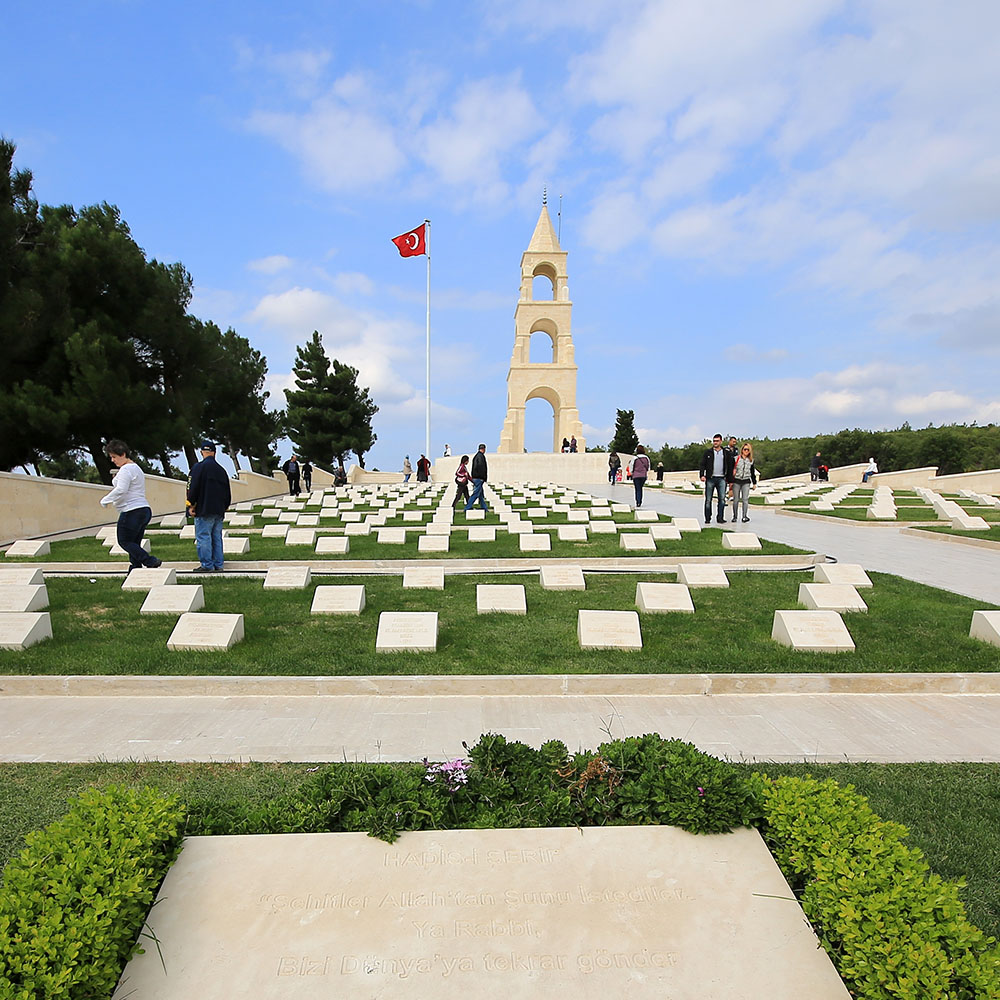 Istanbul is a revelation: there are few places where you’ll find such a diverse array of monuments and fascinating places to visit. We see the immense and beautifully preserved city walls, still dominant after a thousand years, and the Hippodrome where the emperors entertained a staggering 50,000 people.

We enjoy a comprehensive guided tour of the breathtaking Haghia Sophia, one of the city’s best landmarks and quite simply one of the world’s greatest architectural achievements. Built in the 6th century, it was the largest enclosed space in the world for 1,400 years! The artistic highlights are the amazing Byzantine mosaics that seem to cover every wall with their vibrant golds, reds and yellows, and the stunning blue ceramics so typical of the East after it was converted to a mosque some thousand years later. The marble that lines the walls has to be seen to be believed, with each piece specially quarried so the grain blends in a most harmonious manner.

For thousands of years, Istanbul sat at the centre of the overland trade routes, and its Grand Bazaar became home to merchants from all over the known world. Today, more than 4,000 shops sell all types of goods, mainly gold, silver, leatherwear, ceramics and carpets, including fine collectors’ items. This afternoon we have a guided walk here and experience the sights and sounds of this thought-provoking relic of the past. 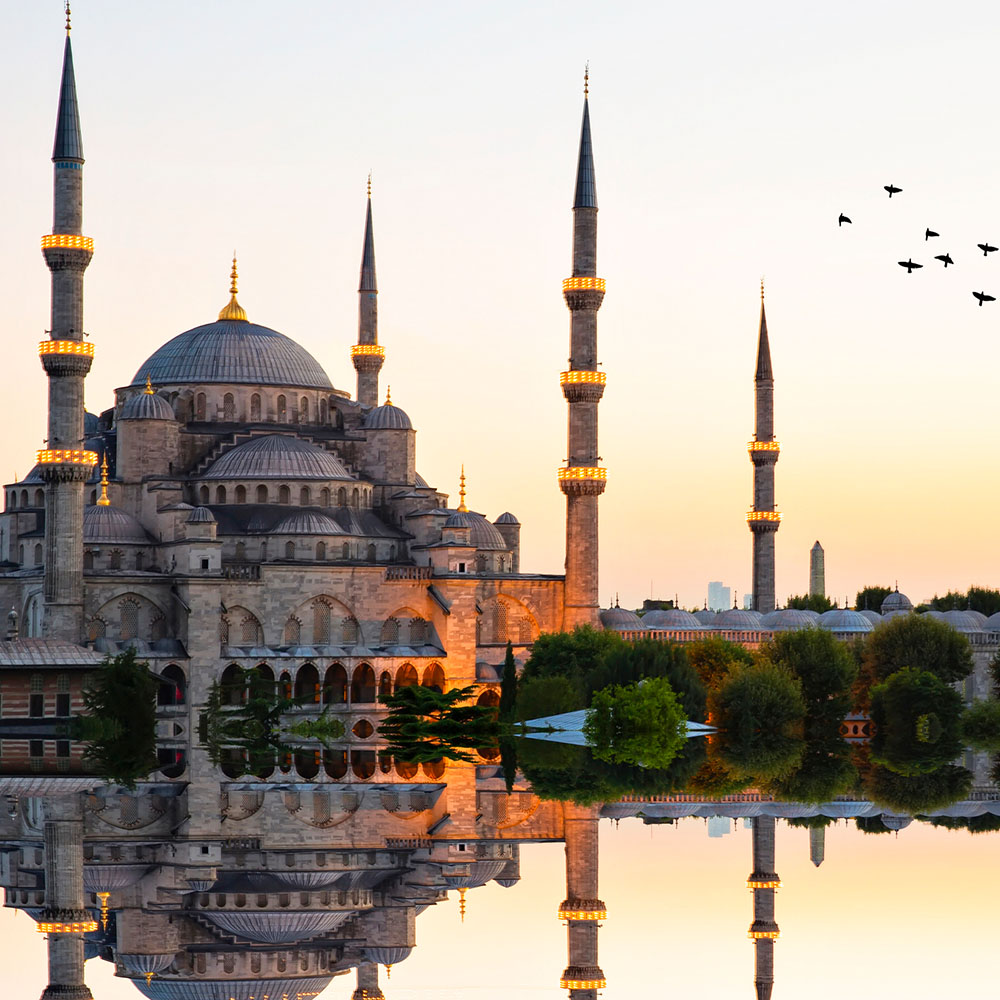 We start the day with a guided tour of the Topkapi Palace, the glittering and labyrinthine imperial residence of the sultans for over 400 years. Today, it is a spectacular museum, but in its heyday it functioned as a city within a city, a home to over 4,000 guards, eunuchs, courtiers and the ladies of the harem. There is a superb display of weapons from throughout history: crossbows, firearms inlaid with ivory and beautifully crafted armour from as far afield as Japan. The treasury is breathtaking too, with an amazing display of jewellery including the world’s fifth-largest diamond, emeralds, jewel-encrusted thrones and the famous Topkapi dagger – all displaying outstanding craftsmanship.

Next we have a short walk around the Spice Bazaar, where your senses are bombarded by the vibrant colours and fragrant smells of herbs and spices from around the world: high-quality saffron from Iran; vanilla from Madagascar; turmeric from India; fresh peppercorns from Indonesia and much more. This entire area encapsulates the spirit of old Istanbul: a maze of tiny busy streets, where the locals chat over apple tea from numerous street vendors, as the commanding horns of the passenger ferries resound under the famous Galata Bridge. The rest of the afternoon is at leisure. 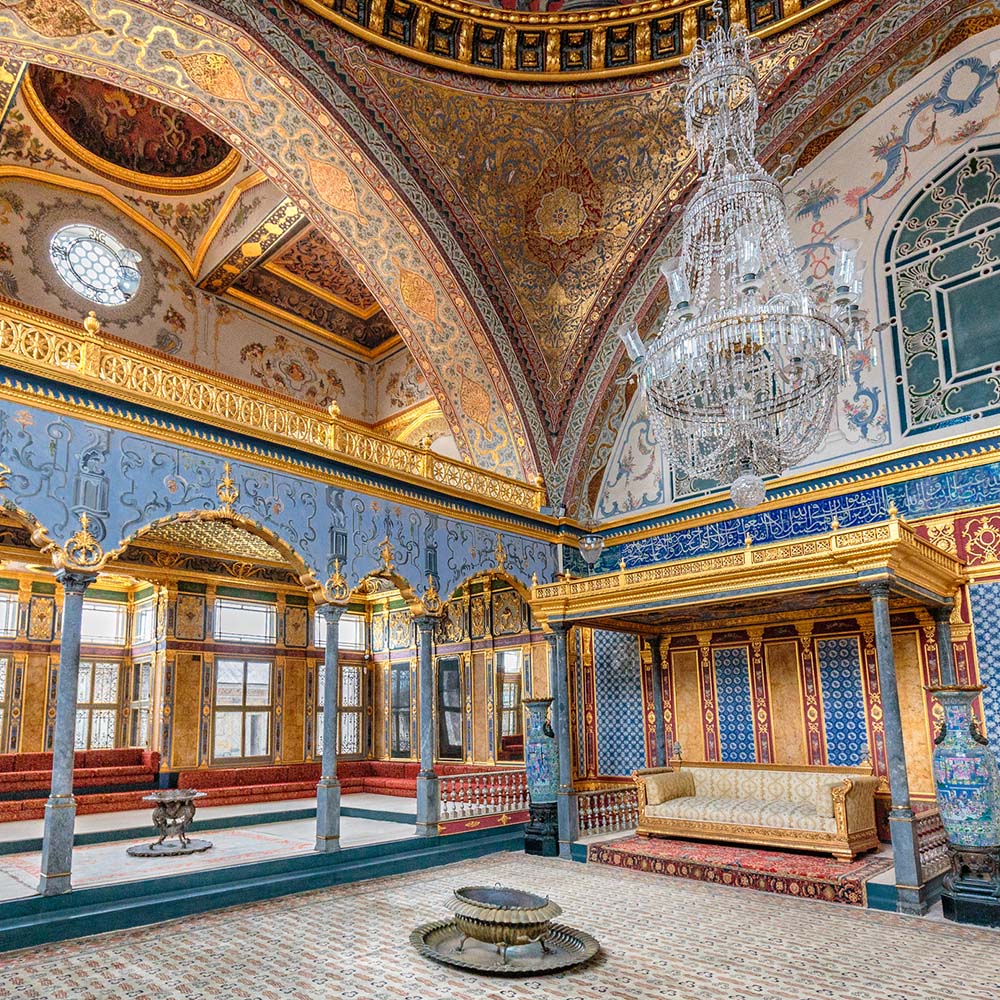 Transfer to the airport for your return flight.

The price of this holiday is per person, based on two people sharing a twin room. Single rooms are available at the relevant supplement. The price includes:

Not included: US$35 Turkish visa payable on arrival and optional entrance to Topkapi Harem quarters is 25 Turkish lira.

An excellent week visiting three very interesting cities whilst enjoying exceptionally good weather. Helsinki - a little disappointed in the city tour which did not cover the sights mentioned in the itinerary (eg the railway stat...

We have just returned from a superb tour of India. The organisation was excellent with all aspects taken care of. We didn't want to have to worry about anything whilst we were away and we were rewarded. Christine our tour manager ...

Unfortunately we are unable to process your order online at this time. Please call one of our advisors on 01 905 6300 who will help complete your order